October 9, 2017 · by kevinmorgan61 · in Event · Leave a comment
THE REVOLUTION IS DEAD, LONG LIVE THE REVOLUTION
A Soundings Seminar in association with Philosophy Football 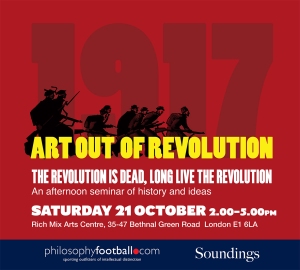 ‘The revolution is dead, long live the revolution’ is the theme of this afternoon seminar for the centenary of October 1917. Organised by Soundings in association with Philosophy Football it aims to provide in the course of the afternoon three hours of participative discussion ranging over the meaning of revolution, then, and now, models of change, old and new, and the legacy of 1917 for how today’s Left organises with a strong historical, theoretical and cultural dimension.

The seminar is chaired and introduced by Jeremy Gilbert, regular contributor to the Guardian Opinion pages, Professor of Cultural and Political Theory at the University of East London and contributor also to the new book The Corbyn Effect

John Medhurst has recently had published by Repeater his new book No Less than Mystic : A History of Lenin and the Russian Revolution for the 21st Century Left

Kevin Morgan is one of the editors of the journal Twentieth Century Communism and has written widely on the history of Communism, particularly British Communism including Communists and British Society 1920-1991 : People of a Special Mould

Hilary Wainwright is a founder and co-editor of the magazine Red Pepper  her latest book A New Politics from the Left will be pubiished in early 2018.

The seminar is free (except for a small fee to cover our admin costs) though advance booking essential.

Want to find out more?